Undergarments, Stays and Side hoops

My first priority is the underwear. In the 18th century the ladies silhouette was framed by her underwear. Many garments were worn under the outer clothing, each adding another shape to the silhouette.  Here are some examples of ladies at their ‘toilette’ from historical paintings and drawings… 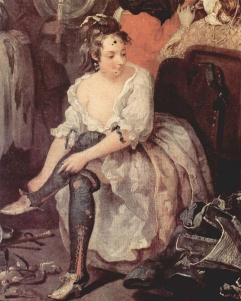 The first layer was the chemise/shift. This has been worn throughout history since the middle ages. The 18th century shift usually came to just below the knee, short enough to be hidden by the petticoats. It was worn to protect the clothes from the unwashed body.  Lace often adorned the low cut neckline which peeped out over the stomacher. Flounced lace cuffs draped out from the dress sleeves of upper class women which seemed to be a part of the chemise but these were often detachable for easy of washing. The chemise was usually made from linen or cotton and sometimes had a drawstring neck and sleeves…

Stockings were made of knit, silk or cotton dependant on season and class. They usually came over the knee but tied just below at the narrowest part of the leg. Some paintings of the period depict the stocking tied above the knee however this was only to give the sitter more sexual appeal as this showed more of the leg. They were fixed in place with a ribbon, cord or strap. The upper classes often had richly embroidered stockings. 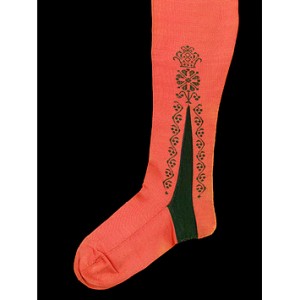 Stays, now called corsets of the period were almost all fully boned. However versions of stays called jumps were worn by working women and only contained around four bones. Jumps also laced at the front for ease of dressing and had laced straps and sometimes detachable sleeves. Formal stays however moulded the body into the fashionable silhouette; this included a flattened front with the bust pushed high and quite exposed and a synched in waist. Stays with the most support were cut very high at the back and had straps to create perfect posture and support for the bust. Formal stays of the period almost always laced at the back, the women that would wear them would have someone on hand to help lace her in. The majority had tabs at the bottom, the whale bones were taken all the way down into these tabs. This relieved tension from the waist making the corset much more comfortable for the wearer.

Now women carry around handbags to keep hold of their personal item but in the 1700’s women often wore pockets. These where not built into their clothing but were tied separately around the ladies waist over her stays. They were accessible from slits in her skirt, petticoat and side hoops. She would store things like money, jewellery, handkerchiefs, snuff boxes, mirrors and combs, scents and practical items such as needles, scissors and thimbles in her pockets. The contents of them were valuable so ladies often slept with their pockets under there pillows at night. When worn the strings of pockets were often cut and stolen by pickpockets. There is a brilliant a link explaining more about them here https://cawhittaker.wordpress.com/wp-admin/post.php?post=113&action=edit 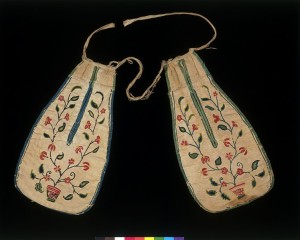 Hooped skirts have been various shapes throughout history. During the 1700’s side hoops later referred to as panniers became normal attire. At the beginning of the century skirts were worn over domed or bell shaped hoops these began to be extended at the side and flattened at the front and back ending up the familiar style we associate with ladies of the 1700’s. The skirts were first made as one whole structure however they were then split and worn in two side hoops, this style was much easier to walk in however the skirts did get so wide that ladies would have to walk through doorways sideways to accommodate their huge dresses. 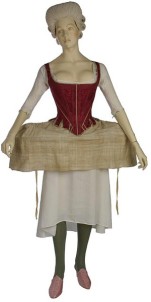 Posted by Chloe A Whittaker in Historical research 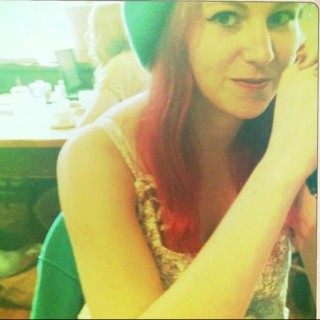 I am a third year Costume Construction and Design student at Queen Margaret University Edinburgh. I plan to use this blog like a sketch book to kept track of my progress of my University projects.